White Ibis save the day in Noosa hinterland 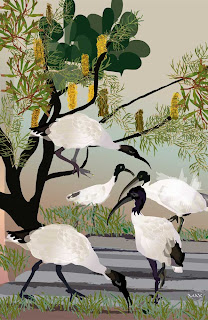 For three weeks in Feburary/March monsoonal rains drenched the lush Sunshine Coast hinterland, then a plague of nasty lawn grubs invaded the lawns surrounding Cooroy House near Noosa. Mercifully a flock of up to 100 White Ibis arrived to save the day. Shining white they flew out of the west to earn the respect of Sunshine Coast gardeners and playing field groundsmen alike. Natural pest control – no toxic residue. City dwellers who refer to White Ibis as tip trash need to rethink.

These new-found friends stayed but two days and a single night. Then vanished. I worked furiously to catch the moment and bring the scene safely into my computer.
Posted by Unknown at 10:02 AM No comments:

healthier, happier – all thanks to you jon kabat-zinn

I found my way into a little book called Wherever You Go, There You Are (well, the title tells you the story before you turn a page. Love it).

Posted by Unknown at 6:02 PM No comments:

“Author and much travelled photographer, ex-adman and nature lover, MaX Fulcher has a unique take on Asia and the Pacific.. "Travel broadens the mind and tourist traps broaden the behind. Go solo. Avoid fellow countrymen. Don't overstay your welcome. Click the photo to return to my home page